You are about to leave a GSK Website. By clicking this link, you will be taken to an external website that is not owned or controlled by GSK, and GSK is not responsible for the content provided on this site. If you do not wish to leave this website, click on “Go Back” below: 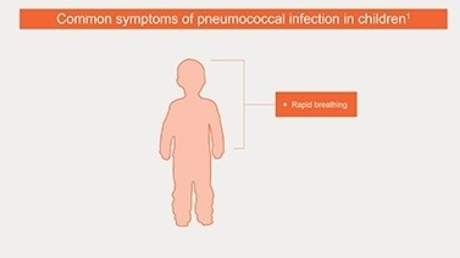 Pneumococcal infection and disease can affect a variety of organ systems, resulting in a number of disease syndromes. Pneumococcal disease can invade more sterile areas of the body, such as the blood or meninges. Additionally, contiguous spread from the nasopharynx may cause diseases such as Otitis media and sinusitis. 1 Below are some examples of symptoms related to areas of infection;

Pneumococcal pneumonia (lung infection) is the most common serious form of pneumococcal disease. According to the World Health Organization, pneumonia should be diagnosed by the identification of alveolar consolidation or pleural effusion on the chest X-ray. 2 Symptoms, among others include rapid breathing. 3

Complications of pneumococcal pneumonia include empyema, pericarditis and endobronchial obstruction, with atelectasis and abscess in the lungs. 3

Pneumococcal meningitis is an infection of the covering of the brain and spinal cord. Symptoms include: 356

In babies, meningitis may cause loss of appetite, low alertness and vomiting.

AOM is one of the most frequent bacterial infections in infancy and early childhood, with approximately 80% of children having had at least one episode of AOM by the time they are 3 years old. Pneumococcus bacteria and Non-typeable haemophilus influenza (NTHi), causes approximately 60-70% of acute otitis media cases. 7

Acute otitis media is usually mild and much more common than the more severe forms of pneumococcal disease. However, some children develop recurrent otitis media and may need ventilating ear tubes. 3

Although AOM can occur at any age, it is principally a disease of the young, with the most common infections happening between 3 months and 3 years. By the age of 1 year, 17% of children will have suffered at least three episodes of OM. 8

Chronic suppurative OM is defined as a chronic inflammation of the middle ear and mastoid cavity, which presents with recurrent ear discharges or otorrhoea through a tympanic perforation. 9 The global estimated incidence rate of chronic suppurative OM is 4.76 per thousand people for a total of 31 million cases, with approximately 23% of these cases occurring in children under 5 years of age. 10

Disease varies depending on the pneumococcal serotype

Although most Streptococcus pneumoniae serotypes have been shown to be able to cause serious disease, prior to the introduction of pneumococcal conjugate vaccines, 6–11 serotypes accounted for 70% of all IPD occurring in children worldwide. 12