ING111762 (SAILING) is a 48 week, phase 3, randomised, double-blind, active-controlled, non-inferiority study that began in October, 2010. Eligible patients had two consecutive plasma HIV-1 RNA assessments of 400 copies per mL or higher (unless >1000 copies per mL at screening), resistance to two or more classes of antiretroviral drugs, and had one to two fully active drugs for background therapy. Participants were randomly assigned (1:1) to once-daily dolutegravir 50 mg or twice-daily raltegravir 400 mg, with investigator-selected background therapy. Matching placebo was given, and study sites were masked to treatment assignment. The primary endpoint was the proportion of patients with plasma HIV-1 RNA less than 50 copies per mL at week 48, evaluated in all participants randomly assigned to treatment groups who received at least one dose of study drug, excluding participants at one site with violations of good clinical practice. Non-inferiority was prespecified with a 12% margin; if non-inferiority was established, then superiority would be tested per a prespecified sequential testing procedure. A key prespecified secondary endpoint was the proportion of patients with treatment-emergent integrase-inhibitor resistance. The trial is registered at ClinicalTrials.gov, NCT01231516. 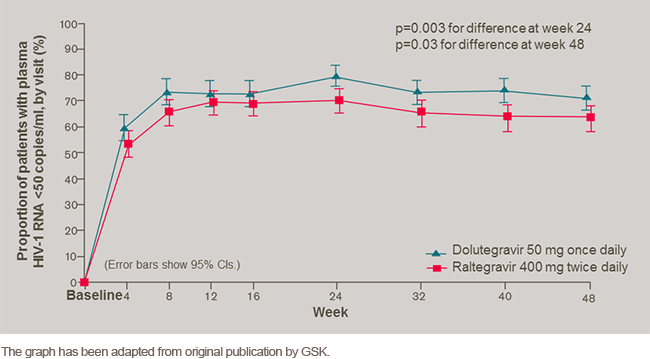 Once-daily dolutegravir, in combination with up to two other antiretroviral drugs, is well tolerated with greater virological effect compared with twice-daily raltegravir in this treatment-experienced patient group.

Abstract copyright: ©2013 Elsevier Ltd. All rights reserved.
Use is by express license from the owner.